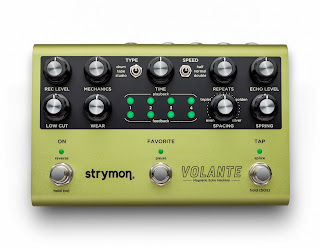 Frankly, I'm not a big fan. As background: I use the Source Audio Nemesis (and Ventris) and I love the Neuro desktop app, which I use extensively. My board is plugged into my pc and when I record, I'm dialing in the sounds from the Neuro. My go-to engines on the Nemesis are the Tape and Tape Noise.

OK, so first, the Volante, as is always the case with Strymon, sounds great. No worries there. All three engines are beautiful. And the controls are fine, good even, (but still no desktop app interface for deeper editing and saving pre-sets). But as far as the sounds from the Volante, I believe I can get all those sounds, or close, from the Nemesis Tape and Tape Noise engines. With the Neuro app, I can dial in a variety of sound parameters to match (exceed) those of the Volante: (3 modulation parameters, tape speed, lo-cut/hi-cut, diffusion, distortion, tremolo, 3 wow/flutter knobs, sweep filters, pan). I did an A/B test comparing the Nemesis and the Volante, and, well, to my ears, they are a little different, but I can get almost all the sounds on the Nemesis. And the Nemesis has sounds the Volante doesn't. I would call it a draw.

What I really wanted in the Volante was an improvement of the SOS over the El Capistan. And yes, it is an improvement. 64 seconds now instead of just 20. And you can adjust the delay while looping. And that's a lot of improvement. But frankly, most (except the degradation) of what the Volante offers in SOS I can do with my looper running through the Nemesis. And I've watched almost all the demos of the SOS on YouTube, and most of what everyone is showing is, too me, not musical. Reversing, and stepping down to half speed, and adding a whole lot of decay, and switching the delay engines while looping is all a wonderful technical achievement, but it doesn't inspire me in the kind of music I'm using it for (ambient guitar soundscapes).

Sorry to be negative here, and I'm a big fan of the Strymon sound, but this pedal just doesn't knock me out. If I didn't have the Nemesis (and use it all the time), I'd love the Volante. If I want 4 or 5 delays on my board, the Volante would be one of them. I'm going to keep working with it, but for now, I'm probably going to send it back.﻿