Whispers: Between October and December

Listening to The Monk By The Sea, a wonderful ambient guitarist, I was really captivated by his song, November, and another piece called In November which is essentially the same basic song but with a different tempo and arrangement. The chord changes haunted me for months and I have tried a few times to create a song based on his changes, but never had results I cared for. I took another shot at it this week and I think I have something that I like. 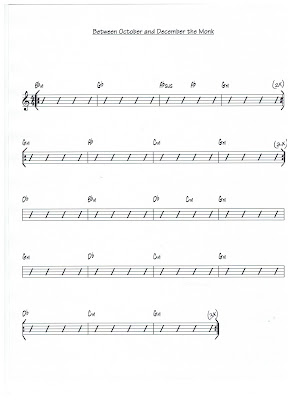 It's an experiment in building a song around proper chord changes, (see attached chart which may not be exactly accurate as to what The Monk recorded, but it's close enough for my purposes), and using a click track so there is an actual steady beat. All of my previous pieces have been "free of time", that is, no consistent beat that can be counted, but instead, just a loose time moving around as the feeling of the piece evolves.
These chord changes are, uh, not what I'm used to coming from the jazz side of music. It's not that they are crazy or weird or anything, but they don't conform to standard jazz practices. Which is I think why I love them! They are haunting; they go where you don't expect; they spend a lot of time in minor; they use chromatic movement a lot; and while it is a short piece, it really covers a lot of ground.
First I laid down the chords using foot-pedal swells. Then I dialed in a buzz-saw crunch and recorded a bass-line over the chords. Frankly, I think this bass-line is interesting enough to be the actual melody of the piece. Next I added a layer in the higher register of the guitar which is an "icy" sound using the Pitchfork to get a "perfect fifth" sound and a "major third" sound. This is interesting for the theory-minded guitarist. To get the "major third" sound: remember that Major chords are comprised of a stacked "major third, minor third", while a minor chord is a stacked "minor third, major third". So for each major chord, I played the root and the Pitchfork played it's major third (resulting in a Root/major third sound); for each minor chord, I played the minor third and the Pitchfork played it's major third resulting in a minor third/fifth sound. I think it's pretty cool. I never thought I'd use those kinds of intervals on the Pitchfork, but, here I did!
I'm grateful to The Monk By The Sea for creating this cool piece.

Update 11/25/2017.... Ughh, for the third time, I've given up on this piece. I just can't seem to get anything that I like when I try to add a melody, or upper line to this. I like the chords and the bassline, but what to put on top? I'm going to put it on the shelf.