Big Find! I've been thinking about doing some video for the blog and decided (after a video showdown testing my Samsung Tab S tablet, my Apple iPad Air 2, and my HTC One M8 smartphone), that I'd use the phone to record the video. Since this whole thing is about the music, I figured I had to have a proper microphone recording the sound, not the "mediocre" built-in mic on the phone. After YouTube research, I found the Saramonic SmartRig interface ($30 on Amazon.) This thing works like a charm! It has phantom power if you are using a condensor mic, and also works without phantom for a dynamic mic (shown here.) It has a gain control and a headphone jack for monitoring. It runs on a 9v battery. 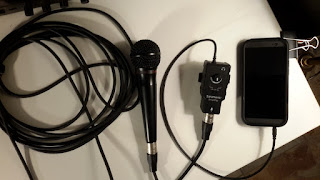 The mic plugs into the Saramonic via XLR cable, and the Saramonic has a supplied (4 ring) cable that plugs into the smartphone and becomes (automatically) the phones "internal mic" substitute. All sound related apps (like voice recorder and video camera) now get their sound from the external microphone. So now I get high-quality sound on my half-baked video recordings. Pretty cool! 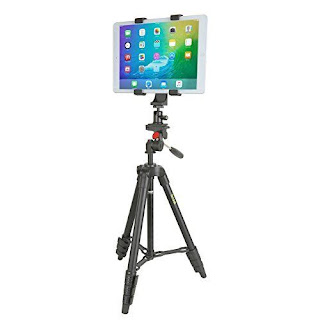 And I bought a tripod to hold my smartphone: (from Amazon $40) iKross 47 inch Digital Camera Tripod with 4 adapter for smartphone, tablet, DSLR camera, and carrying bag.

I'm good-to-go on the video front!